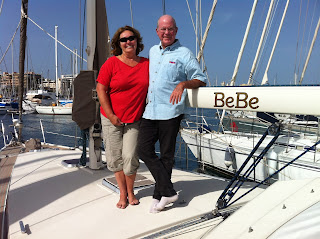 About Amel Owners Yacht School
My wife, Judy, and I enjoyed 11 years circumnavigating the world aboard our 2003 Amel Super Maramu, BeBe. We logged over 40,000 miles and visited 58 countries. Our Circumnavigation Blog aboard BeBe, SM #387, is at www.svbebe.com. Interested in costs?  See Cruising 10-year average costs aboard Amel BeBe.


Originally, I called my effort "Amel School" with the slogan, "Prepare to Cast Off." In April 2019, I completed changing the name from Amel School to Amel Owners Yacht School also known as Yacht School, which is what I should have named it in the first place. All my clients found me because of my reputation of being helpful and supportive of the members of Amel Yacht Owners Group, and/or because of my wife's very well-read blog, s/v BeBe.

During our circumnavigation aboard our 2003 Amel Super Maramu, BeBe, I became self-taught on almost everything about Amel yachts and the systems installed on Amels. I obtained hundreds of OEM device…
MORE ABOUT AMEL OWNERS YACHT SCHOOL»